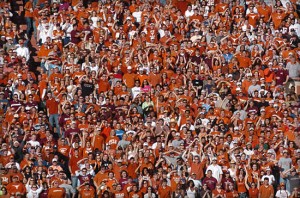 When you say that you are a supporter of something, have you ever considered whether you are in fact a supporter (someone who actively contributes to the cause) or just a casual fan – someone who simply follows the crowd when there is fun to be had, but does nothing actively to further the cause?

All too often, I have found that the loudest “supporters” actually fall into the latter category – they talk big about supporting something, but when it comes to the crunch, they back off, compromise, or simply disappear. A good example is a fan of a local music group who is very vocal, but never buys their music or tickets to their performances.
If you do not wish to actively contribute, then try not to be too loud, because the more people see such “fans”, the more diluted their opinion of the cause becomes — more noise, less substance.

If you truly want to support a cause, then do so with actions, not empty words and shouting meaningless, jingoistic slogans. Be seen as practical and supportive through things you do, not things you say.

More often than not, the make or break of a cause is human relations. So for $deity’s sake don’t be that moron who ruins the entire image of the cause by tearing into people who support something else (as well). Try to attract and retain supporters by making your cause seem to be something they want to be part of. Don’t repel them by making yourself an example of all that’s unattractive about your cause.