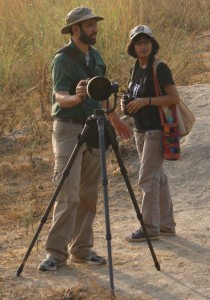 n the summer of 1989, the door to my office opened and someone walked in. Jeans-clad, complete with jacket, a neat, trimmed full beard, and a deep voice.

That was the beginning of what has been one of the longest and most cherished friendships and working relationships I have had, and it continues to this day.

Kishore and I actually met online first, and it was only a year later that we met face to face. Those were the early days of online communication in India. I was deep into the development of communication software, including CyberNet, a corporate communication host – a kind of BBS that was tuned for corporate needs – that I also ran as a public BBS that people could dial into. Kishore was setting up something similar in Delhi, and it was natural that we would run into each other.

But this post is not about what adventures Kishore and I had over more than two decades.

It is about his own personal adventure with his wife, Jyoti.

I met Jyoti a few years after I met Kishore – on one of my trips after I started writing my column for PC Quest, and began my country-wide speaking tours. I landed up in Delhi, and stayed with Jyoti and Kishore.

I was a very different person then. If you think I can be obnoxious, intrusive and hard-headed now, you should ask Jyoti about what I was like back in the early 1990s.

While I was earnest in everything I did, I was also inflexible, smoking like a chimney, loud and ate like they didn’t feed us where I came from. I entered their house like a storm, upset everything in sight, rearranged her very classy home, and generally ensured that Jyoti had every excuse to ban me from her house forever.

Time after time I was welcomed back, and even though over the years I monopolised Kishore’s time to a point that I actually saw more of him than she did over a decade, she grumbled, but “let the boys play”.

My exposure to Jyoti and Kishore’s relationship changed my own life, and my relationship to Shubha. Jyoti and I had many yelling matches, and I learnt the hard way that I didn’t really know everything there was to know about relationships. And these lessons helped ensure that Shubha and I completed our own 25 years in February 2012.

For me, seeing Jyoti and Kishore go through life, facing things together, and always managing to come out ahead, has been one of the greatest joys of my life.

And today, on Jyoti and Kishore’s 25th wedding anniversary, I pray that nothing every manages to change this epitome of stability and joy.

Congratulations, Jyoti and Kishore Bhargava! March on, strong and confident, towards your 50th anniversary.