Note: This article was originally written in late 2011.

I am often asked by some very confused people – “Should I buy an eBook reader, or a tablet?” 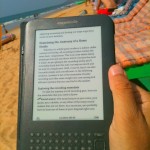 eBook readers are really cheap, and by that I mean affordable, not bad quality. The best of them, the Amazon Kindle, is priced at less than $80. It has WiFi, lets you browse, buy and download books online, and will run for a month on a single battery charge. The e-ink screen has a paper-like quality, and can be read effortlessly for hours, without any perceived eyestrain. It takes a few minutes to learn and master the device, and you are off. And it can store thousands of books at a time, more than you can read in a couple of years, or even decades. you can even play audiobooks and music mp3s, with it, and if you don’t want to even read, but just have someone read you a story, it can do that too, with a surprisingly good text-to-speech system. Most people who use an ebook reader don’t even perceive it as technology, let alone a computer (though it obviously is one).

Compare this to the other end of the spectrum – the media tablet (or just “tablet”).

The tablet, first seen in January 2010 when Apple introduced the iPad, is largely seen as a “Post-PC device” – a non-PC. Which does not mean that it is in any way less capable or disruptive than the first PC was back in the late 70s (Apple’s Apple I). In the 18 months after the release of the first iPad, the world saw a dramatic shift from the the almost ubiquitous desktop/notebook computer to tablets, as “the next billion users” adopted the iPad as if they were waiting for it for decades – which they were, in fact.

As I am writing this (on my iPad 2, wirelessly connected to my TV), I have seen a dramatic reduction of my own use of PC-style computers.

That’s a LOT for someone who has been a power user of computers since the early 1980s. And it all happened in less than 2 years since I got my first iPad. I don’t even carry a notebook computer with me anymore when I travel!

In short – I do everything on it that I used to use a PC for. All in an A4-sized package not much heavier than a pad of paper. And it runs the whole day on single battery charge.

Sounds like I am totally sold on the tablet concept (which I don’t deny), and therefore recommend that everyone get one, right?

Look closely at my usage – there is something missing there.

I don’t read books on my tablet. In fact, I don’t read anything longer than a few pages on it.

That is because, like everyone else in the world, reading off a back-lit screen is completely unnatural to me, strains my eyes, and (given the versatile nature of the tablet) is way too distracting.

I read books and long texts on my ebook reader (I currently use a 3rd generation Amazon Kindle). No eye-strain, no distractions, no pain. And I can even read it in broad daylight, on the beach, with the sun beating down on it. I can charge it once before I go on a vacation, and not even carry a charger with me, because the battery will run for a month. And I can carry a huge selection of reading material with me – ranging from Steve Jobs’ biography (now here’s some irony), the entire Isaac Asimov collection, in fact every book I have ever read or plan to read. Thousands of them. And I can search across books, make annotations (margin notes) if needed, and in a crunch can even go online and get more books.

If I had an ebook reader when I was a student in school and college, I would have never had to carry a schoolbag full of heavy books, and would have had access to more knowledge at any given time than any student in history would have had. I could have read a textbook, looked up information in a reference book, cross-referenced information across a wide number of sources – and all without ever connecting to the internet (which didn’t even exist in those days). And all that without internet-related distractions such as Twitter, Facebook, etc.

In short, as a student, or as someone who loves to read, I would have gained much more from an ebook reader than I would have from a tablet -

Because an ebook reader is meant to work as a book. Not as a computer.

That brings us to the much fabled $35 tablet that the Government of India so thoughtlessly decided to force on elected Indian students. An outdated design of a tablet, that runs for a couple of hours on battery, with no content available for it yet, and with limited connectivity via GPRS (not even 3G). An outdated resistive screen technology.

The Aakash (as this device was finally called) is an obsolete piece of equipment that saw its market die while there were still huge inventories in the Chinese manufacturer’s godowns (yes, there is nothing Indian about the device – it is designed and manufactured in China). This inventory is now being dumped on the poor Indian market, and will end up being nothing more than a cheap entertainment device – not for the students who will purchase it, but their parents or elder siblings. After all, a tablet is GREAT for watching movies on. ANY kind of movies. Ahem.

And at the same time, the students will have no access to textbooks – just as it was before they got their (by their standards) expensive pieces of technology.

Technology is useless unless it can deliver to the user what the user needs.

In the case of Indian students, that would be textbooks.

While eBooks are expensive in general (eBooks are not about cost but convenience – a subject for another discussion), textbooks in India, especially at school level, are primarily priced according to the cost of printing and distribution. Given that there is no cost of printing with eBooks, and distribution can be done quickly and cheaply via even GPRS (though a local side-load from a micro-SD card is probably more effective), the benefits to students would have been dramatic, and far-reaching.

And there is plenty of scope for localisation (i.e. given a cheap Chinese eReader device, our much-vaunted IITs could have actually done something immediately useful, such as create Indian language interfaces, fonts and texts).

And, best of all, no danger of the device being hijacked by parents or elder siblings for purposes not intended – you can’t watch movies on it.

One single eReader device would hold every textbook that the students would need throughout their academic life, in a lightweight package that would run on a single battery charge for a month. And it would forever free students of the shoulder-breaking burden of a school bag full of heavy, expensive paper books.

The benefits of technology

I am a technologist, but that does not mean that I am trying to get people to use technology, but to get the benefits of technology. The actual technology that delivers these benefits is secondary.

So what would I advise the Government of India to do?

Go back to the negotiation table. Get cheap e-ink based ebook readers, even without WiFi or any form of connectivity other than USB or maybe a micro-SD card. Negotiate by the millions, get the prices down (a typical ebook reader can cost as much as 25% of a cheap tablet), pile on the subsidies, and then spend your time converting textbooks to eBooks. Crowd-source the process, offer incentives. Use scanners, OCRs, and even pay people to type in textbooks. Then make them available to students. In common formats such ePub – without useless DRM (Digital Rights Management) that can anyway be cracked in seconds, and just inconveniences the legitimate user, never a pirate. Sell the ebook readers preloaded with several hundreds (or even thousands) of books in all possible languages, and THEN watch the technology benefits reach students.

Stop being so enamoured by the lure and glitz of media tablets like the iPad or its Android-competitors. Students don’t need tablets at this point – they need textbooks, and for any kind of reading, eBook readers are far more suitable than tablets.

Take it from someone who has access to every technology, tablet and other device under the sun, but will still curl up with his “lowly” eBook reader when it comes to reading a book or a reference text, or who won’t even think about taking his iPad out of his hotel room as he hits the beach during a vacation.

Technology is about the benefits, not about the device you use.