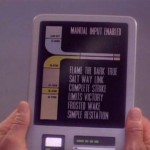 I believe that the concept of the primadonna “smartphone” has started to plateau.

Despite protests from the gadget crowd (who usually are the last to know anyway because they are too enamoured with their latest purchase), I see the “smartphone” having run its race. It will now give way to what the original Personal Digital Assistant (PDA) had promised to be since the days of Star Trek – a window into the endless streams of data that we depend on for our daily lives.

“Phone” functionality, while likely to stick around, is going to be the least used functionality in these devices. And to remain truly portable (or “mobile” – aka “usable in real life”), these devices will probably retain the phone form factor.

Focus will shift to applications, data and productivity.

And this is going to be really hard on the incumbent czars of gadgetry – people like Apple, Samsung and others. Manufacturers have just about milked designs for hardware features to differentiate themselves. Future differentiation will be in software – as it was always meant to be.

Even Apple, traditionally a hardware company, will have to start innovating at the platform & software level to differentiate themselves. To be fair, their relentless push to improve and further the functionality of iOS, OSX and iCloud seems to indicate that they have figured this out years ago, and have some kind of master plan in place. And I suspect that this is really where Steve Jobs’ invisible hand from the beyond will guide them. The man had always been about functionality and productivity anyway and less about hardware (which has always been Sir Jony’s domain). He was always about what you could do with it, rather than what was in it (functionality vs specifications).

And this is where the real opportunities will appear for innovative software developers. What we have seen so far is just the beginning – apps on smartphones and tablets just showed what was possible, but in many ways still mirrored the PC functionality of yesteryear.

Now the time has come to start creating those “Windows into data streams” applications, where you can assume almost zero local storage and unlimited, always-on connectivity.

Just like most ISPs will eventually be treated as dumb pipes to deliver connectivity to apps, phones/tablets will become “platform devices”.

At that point, the winner will be the platform owner who PARTNERS with app developers, not just provide them with a platform.

The next 1-2 years will be interesting to watch as traditional hardware manufacturers will have to reinvent themselves.

Oh, and advertising as a business model? No longer feasible. Hasn’t been for years. I am pretty certain that Facebook has realised this as well. And maybe even Google. Revenues will only come from real products/services that build on people’s actual needs.